John used to write a weekly column for two local newspapers on the outdoors. We hope you find this  interesting.  It is about his Minnesota wildlife photography experience. This amateur nature photography tour is an excellent option for guests of Woodland Trails B&B.

This year my family came up with a unique Father’s Day gift, a wildlife photo shoot at Minnesota Wildlife Connection.

Lee and Sandy Greenly have established a game farm for photographers on their land located on the banks of the Kettle River just south of Sandstone. They have every native species imaginable, from porcupines and raccoons to cougars, timber wolves and bears. Professional photographers come from all over the country to photograph the animals in natural settings. In a day at Minnesota Wildlife Connection, a photographer can take pictures that would take weeks of work to get in the wild. As a result, almost all photos of wildlife you see in magazines, on calendars and similar places were taken at a facility such as this.

Most of the Greenlys’ business comes from professional photographers but a few times each year they have amateur day – a three-hour event especially for amateur photographers. Our daughter Stacy and I participated in on such amateur day.

We arrived at 7:00 a.m. on Saturday morning as instructed where we met a half dozen other amateur photographers, some with an observer. All of these people had driven up from the Twin Cities. Most had learned about Minnesota Wildlife Connection through a wildlife photography class they had taken through the University of Minnesota’s Extension Service.

While this was to be a day for amateurs, after looking at their equipment, it was clear most of the people were very serious amateurs. They all had serious-looking cameras with lenses a foot or more long. All but one of the cameras appeared to be the new digital variety. Some of the people even had the photographer’s vest with a dozen or more pockets for gadgets.

Stacy fit in with the group. A few years ago, for a photo safari in Africa, she bought an expensive Nikon camera with an even more expensive telephoto lens. On the safari, which amounted to riding around the plain with a guide driving a Land Rover, she learned the big lens was pretty useless. The animals were so accustomed to people with cameras on these safaris that they didn’t bother to move as the Land Rover approached. With her big lens, Stacy could photograph the nose hairs of a lion. On the other hand, if she wanted a photo of the full lion, she had to ask the guide to back off a hundred feet or more.

Anticipating this day at Minnesota Wildlife Connection Stacy traded in her Nikon film camera body for a new digital one that fit her big lens. She also bought two storage discs, each with huge capacity.

Among all these professional-looking photographers was me with my Canon G2 digital, a nice unit for taking snapshots but not in the league with Stacy and the others. Worse yet, I quickly learned at an event like this one takes many dozens or even hundreds of shots hoping to get a few good ones. Half way through, my storage discs were full.

With my camera discs full, I got to do something I thought was more interesting than photography; watching the handlers work with the animals and the other photographers scrambling for the best vantage points.

On amateur day, Lee Greenly normally brings out the young animals because they are cuter and easier to handle than adults.

Our first stop was one of the deer pens with 6-foot high fence. The pen was an acre or two but visibility was limited to 100 feet because of the trees and brush. When everyone was inside the pen, Lee called out in a high-pitched voice, “Mikie! Princess! Here Mikie! Here Princess!” In less than a minute, Mikie came out of the brush and, showing no fear, walked right up to our group. Lee handed Stacy a bottle of milk which she offered to Mikie. He finished it off in what seemed like a few seconds. Then Princess appeared out of the brush and headed toward one of the other participants with a bottle of milk as cameras were clicking. 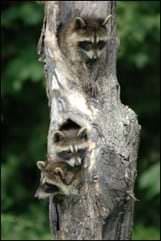 Our next stop was a pond with a small island 30 feet off shore. Handlers Lance Alm and Tim Nelson put two dog crates in a boat and took them over to the island. Out of one crate came an adult male red fox named Boy. Lance and Tim chose boy for this job because they know he doesn’t like the water and would stay on the island. Out of the other crate came five fox pups that were about six weeks old. It was recess time on fox island as all six romped around while the photographers snapped scores of pictures.

The third stop was with a young badger. After Tim dug out a six-inch square piece of sod, Lance put the badger down next to the started hole. It is clear these animals are digging machines as the badger went right to work digging out the hole further. Within minutes he was a foot down. As the badger was digging, Lance would pull him out of the hole by his tail and place him back down the hole rear end first. In the few seconds it took the badger to climb out of the hole and back in to resume digging, cameras would click away.

The last stop was with a family of three young raccoons. Tim placed them on a hollow tree where they climbed in and out of holes making for dozens of cute poses.

One overriding impression I got during the experience is how comfortable Lee, Tim and Lance are in working with the animals. They seem to know exactly how to handle each one so they seldom get bit or scratched. When asked if he gets bit often, Tim responded with, “No, not often but I can tell you wolf gloves don’t always work.” Some day I’ll get the details of that experience with a wolf.

If you or the photographer in your family would like to participate in a future amateur day, I highly recommend the experience. We paid over $200 each for the session that took about four hours. That may sound like a lot until you realize it’s a unique experience that couldn’t be duplicated anywhere else at any price. I will certainly remember it as my most unique Father’s Day gift.

For more information, first check their web site at and then call Lee and Sandy Greenly at 320-245-2017.