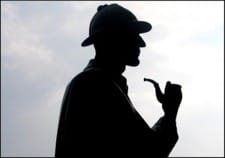 I am surprised how few people realize that Sherlock Holmes and Dr. John Watson visited Hinckley during the summer of 1894.  The details of their visit were recorded by Dr. Watson in a manuscript titled Sherlock Homes and the Red Demon.  Larry Millett, who edited the manuscript and published it in book form, recounts in the introduction how the manuscript was found and authenticated.

Sherlock Homes and the Red Demon – a hitherto unknown Sherlock Holmes adventure – is in every respect an extraordinary document.  Not the least of its wonders is the fact that for one hundred years, it lay hidden in the massive walls of the James J. Hill mansion in St. Paul, Minnesota.  How it came to be discovered there, in a secret safe, is a tale worthy of Holmes himself.

Millet goes on to explain that on July 20, 1994, James Parkins, a master electrician employed by a St. Paul contracting firm, was assigned to work in the hill mansion.  As Parkins attempted to “fish” wiring through a wall behind a massive built-in bookcase in the library, he struck solid metal.  Further investigation revealed a large object embedded in the wall, and Parkins surmised – correctly, as it turned out – that he had found an old safe.

Officials of the Minnesota Historical Society, which owns the Hill House, hired a locksmith and, on August 3, 1994, the safe was opened.  Among the treasures contained inside was a manuscript entitled Sherlock Homes and the Red Demon, written by none other than Dr. John H. Watson.

The manuscript provides valuable insights into the life and times of Hill, the railroad tycoon who more than any other man created the vast inland empire of America’s Northwest.  Although readers today may find it odd that Hill would have reached all the way to England to hire Holmes, such a bold move was consistent with the Empire Builder’s character.  When he perceived his larger interests to be at risk, he would go to any length and bear any cost in order to eliminate the threat.  Hiring Holmes was, from Hill’s point of view, merely a matter of good business.

More important, the manuscript shed stunning new light on one of the great natural disasters of its era – the Hinckley Minnesota forest fire of 1894.  The cause of this deadly conflagration has long been the source of speculation.  But if Watson’s account is to be believed (and there is no reason to doubt its veracity), the fire was an act of mass murder.

Skeptical readers may think it unlikely, and perhaps even entirely unbelievable, that Sherlock Holmes visited faraway Hinckley, Minnesota in 1894.  As a result, in 1994, the Historical Society retained a renowned consultant to examine the handwritten manuscript and determine its authenticity, or lack thereof.

After reviewing the evidence, the consultant came to the conclusion that the manuscript is absolutely authentic.  He said, “I have examined all of Dr. Watson’s original manuscripts – now housed in the Watson Archives at the British Museum in London – and have come to know his handwriting as well as my own.  The manuscript found in the walls of the Hill mansion came from the hand of Watson, there can be no doubt.”

He also noted that Watson favored a distinctive type of foolscrap writing paper manufactured by the Eynsford Paper Mills in Eynsford, Kent, England.  A watermark of the kind used by the Eynsford Mills between 1893 and 1900 is clearly visible on the manuscript pages of Sherlock Homes and the Red Demon. At least six other authenticated Watson manuscripts from this period bear the identical watermark.

A remaining question is how could a document as rare and valuable as a Sherlock Holmes adventure remain hidden for a century?  As readers will learn, Hill had good reason not to share the manuscript with the world, for it contains information of a highly explosive nature that could have severely (if perhaps unjustly) damaged his reputation.  For this reason, it is likely that Hill, who controlled the purse strings and much else in the case, secured a promise from Watson that only one copy of the manuscript be made.  That Watson lived up to his end of the agreement there can be no doubt.

So, did Sherlock Holmes and Dr. Watson visit Hinckley in 1894?  Was the Hinckley fire an act of mass murder?  Did Holmes and Watson know who was behind the deadly conflagration?  Read Sherlock Homes and the Red Demon by Larry Millet (editor) and decide for yourself.  The book is available to borrow from the Hinckley library and for purchase at the Hinckley Fire Museum.

We obtained several used copies through Amazon.com.  Normally they would be priced at $7.50 each but, for Woodland Trails guests, if you find a copy on our second floor bookshelf, you are welcome to take it aong when you leave with our compliments. 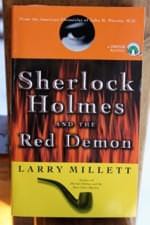 When you have finished with the book, perhaps you will join me in claiming with pride that Sherlock Holmes and Dr. Watson are indeed Hinckley’s most famous visitors.  We needn’t apologize for the fact that they are fictional characters created by Sir Arthur Conan Doyle and brought to Hinckley by Larry Millett.  After all, what famous people, real or fictional, have visited Mora or Rush City or Moose Lake?  Not only did we have these famous visitors but their exploits while they were here are available for all to read and enjoy in Sherlock Homes and the Red Demon.